The Saturday was dedicated to the emmigration and the crossing to the new world. I went from Bremen to Bremerhaven by train in about 1.5 hours and continued by bus to the German Emigration Center at the harbour. You can experience and learn about the emigration from Germany as well as the immigration to Germany.

The visit starts with the Boarding Pass including one emmigration and one immigration story of acutal people, whose story you can follow through the museum.

Then, the journey begins.
On the wall in the dark waitingroom, a sign from the Police warns about cardplayers, pocket thiefs and people trying to sell fake ship tickets. The doors open, and we climb a small, wooden staircase up to the pier, where the ship is waiting. The steamship “Lahn” is ready to leave, groups of emigrants hurry towards the ship between piles of luggage and barrels of supplies. One can hear a wild mix of European language among the blustering motors and the creaky sounds of the dandeling ship. Women, children, seniors and youngsters of the various times – they all hope for a better life in the new world.


The reasons for leaving their homes and to dare the dangerous crossing are explained in the Gallery of the 7 millions. One can learn about the various reasons for emmigration and see the different waves on timelines, but also the stories of individuals are told here. This is how I learned that a familiar name – Ottmar Mergenthaler – after whom a school in my town is named, once left for the new world.

We continue to bard the ship, over 3000 nautical miles lie ahead of us. Steep stairs along the portholes bring us onto the “Lahn”. A last view back – and we are inside the ship.

In the luggage room one finds the models of the various ships – from the small sailingboat to the ocean liners – and the vast differences become apparent. The tour continues to the cabins of the ships. The first cabin is the dark and sticky deck on the sailing ship Bremen (1854), followed by the nicer dorm of the steamship Lahn (1887), and it finishes in the 4-bed tourist cabin and the cafeteria of the ocean liner Columbus (1929). While the sailing ships needed 6-8 weeks for the crossing, the steamships only need about 2 weeks to New York.


The heart is beating. The long corridor of Ellis Island – then the immigration test. Will I make it? 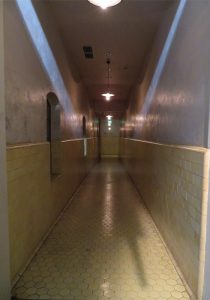 The early immigrants landed on one of many piers in New York and sourroundings. From 1855, the first immigration center Castle Garden at the southern tip of Manhattan registered all immigrants for the first time. When it became too small for the masses arriving, Ellis Island was opened in 1892 to manage everyone arriving at the port of New York. My great-great-grandfather arrived at a pier in Hoboken in 1880, but was centrally registerd via the ship’s manifest.

The tour continues to the “Office of the New World”, where we can find a map of the USA with the towns named after European towns, and we finally arrive in the Grand Central Terminal, from where we scatter in all corners of the new world. The first part of the museum ends here, while the second part about immigration to Gemany starts here.
In the room for family research, computers are provided for free research in various databases. I did found the passengerlist of the “Donau” from December 1880, including my great-great-grandfather Otto Dahl.