The departure from Barmen had arrived – on the 6th of May. Like my great-great-grandfather, I chose the departure time for 10:36 (he had left at 10:07).

Read my great-great-grandfather’s diary about his departure here.

For the grand beginning of the journey, I put on the historic dress of course, and I was happy that my entire backpack fittet into the suitcase instead of the dress, so I only had to carry the suitcase and my purse. We met Timo Spicker again fromt the broadcasting station WDR, who wanted to film the departure after yesterday’s highly emotional day. After we had filmed a variety of scenes and some small interviews, the train arrived and I said goodbye to my aunt Ricarda who had accompanied me to the station. We almost missed the train, because the doors were already closing when I jumped towards them and even rolled over my dress with the suitcase. Shortly after the station Oberbarmen we passed the former facory grounds “in den Höfen” – just like my great-great-grandfather – but due to a noise protection wall they were not very well visible. Only now the excitement calmed somewhat and we kept talking until the station of Hagen. Here, I said goodbye to Timo Spicker and his assistant, and they helped me board my next train to Bremen. The air was so hot in the train that I had to take off my dress immediately – fortunately there were not many people in the train and I was able to open my large suitcase and repack everything. I continued to Bremen wearing Leggins an the T-shirt, where I arrived around half past one at bright sunshine.

Watch the video about the days in Wuppertal and the departure here (in German). 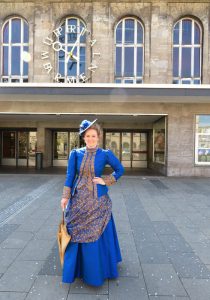 In Bremen, I checked into the same Hotel as my great-great-grandfather. The former Hotel Schaper, in which he had slept, was fusioned to the Hotel Schaper-Siedenburg and is now called Best Western Hotel Bremen City. The Hotel director showed me old pictures of the former building of the Hotel Schaper which was located on the other side of the street (Bahnhofsstrasse) of the current Hotel, before it was destroyed during a bombing in 1944.

During the evening I went to dine in the Bremer Ratskeller – just like Otto did. Togehter with my aunt and uncle, we had the typical dish Lapskaus and drank some white wine. Instead of writing postcards, I tried to send messages via the phone, which was impossible due to the lack of cell phone coverage in the cellar.