Lincoln Square
Chicago’s German side can be best explored in the neighbourhood of Lincoln Square. It’s about 30 Minutes from downtown Chicago by the brown line – stop “Western”. 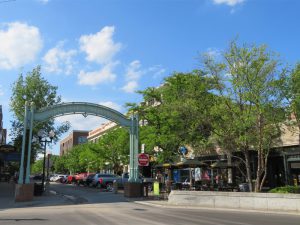 DANK Haus
The first and best adress to go is the DANK Haus – the german cultural center is located at 4740 North Western Avenue, just a block away from the metro station. The DANK Haus features a three-room museum about the Germans in Chicago, a rare portrait of emperor William I and the best view of the Chicago skyline from the roof terrace. More importantly, the DANK Haus offers German classes and organizes a wide variety of cultural events, from cooking classes to public viewing of soccer games.
More information under: www.dankhaus.com

German traces
In Lincoln Square, you can find quite some German traces, all very close to each other. It starts with a piece of the Berlin Wall at the metro station “Western”, where you get off. In the main area at N Lincoln Ave, you can finde the beautiful Merz Apothecary, founded in 1875 by Peter Merz, a Chicago pharmasist of Swiss decent. A little further down the street one can find a large wall painting with all the major German sights, from the Brandenburg Gate to the Castle Neuschwanstein, it takes you on a little trip to Germany. In front of it, a bavarian Maibaum completes the German picture of the neighbourhood.

German restaurants & German beer tasting tour
Most importantly, the variety of German restaurants in the neighbourhood complete the perfect German experience. When I walked into the Chicago Brauhaus, the first person I talked to was a band member who welcomed me with a heavy austrian accent. It’s the Brauhaus where I met a German (of course member of the above mentioned DANK Haus), and we continued the little German beer tasting tour through the Hansa Clipper and the rooftop of Gene’s Sausage Shop just down the street. After returning to the DANK Haus for a German cooking class, we went alltogehter to the Hüttenbar (in case I need to mention this: also just down the street), where we got some more sponsored drinks from an American couple (remember: this is what happens if you go to bars in a victorian dress).

Not down the street, but walkable from the Dank Haus (1,3 m/2 km) are two more mentionable German restaurants: Resi’s Bierstube with a small beer garden – serving one of my favourite beers: Augustiner and the Laschet’s Inn with very authentic food and a wide variety of German beers.